Tao JIANG teaches at Rutgers University in New Brunswick, NJ. His research interests include pre-Qin classical Chinese philosophy, Mahāyāna Buddhist philosophy, and cross-cultural philosophy. He is the author of Origins of Moral-Political Philosophy in Early China (Oxford, 2021), Contexts and Dialogue: Yogācāra Buddhism and Modern Psychology on the Subliminal Mind (Hawai'i, 2006), and the co-editor of The Reception and Rendition of Freud in China (Routledge, 2013). He is chair of Religion Department and director of Center for Chinese Studies at Rutgers. He co-chairs the Rutgers Workshop on Chinese Philosophy (RWCP), the Neo-Confucian Studies Seminar at Columbia University, and the Buddhist Philosophy Unit at the American Academy of Religion.

This Friday, Oct. 1, at 1pm New York time, Rutgers Center for Chinese Studies is hosting Yutang Jin, a postdoc fellow at Princeton’s Department of Politics, for a talk with the title, “Confucian Leadership Democracy for East Asia.” It is open to the public, but registration is required. Click here to get more info and to register.

My new book, Origins of Moral-Political Philosophy in Early China: Contestation of Humaneness, Justice, and Personal Freedom, has just been published by Oxford University Press (OUP 2021). It is available in both paperback and hardcover. Use the code AAFLYG6 to get a 30% discount off on the publisher’s website (OUP website). A detailed Table of Contents (including a tentative Chinese translation of ToC) can be found here.

This book rewrites the story of classical Chinese philosophy, which has always been considered the single most creative and vibrant chapter in the history of Chinese philosophy. Works attributed to Confucius, Mozi, Mencius, Laozi, Zhuangzi, Xunzi, Han Feizi and many others represent the very origins of moral and political thinking in China. As testimony to their enduring stature, in recent decades many Chinese intellectuals, and even leading politicians, have turned to those classics, especially Confucian texts, for alternative or complementary sources of moral authority and political legitimacy. Therefore, philosophical inquiries into core normative values embedded in those classical texts are crucial to the ongoing scholarly discussion about China as China turns more culturally inward. It can also contribute to the spirited contemporary debate about the nature of philosophical reasoning, especially in the non-Western traditions.

This book offers a new narrative and interpretative framework about the origins of moral-political philosophy that tracks how the three normative values, humaneness, justice, and personal freedom, were formulated, reformulated, and contested by early Chinese philosophers in their effort to negotiate the relationship among three distinct domains, the personal, the familial, and the political. Such efforts took place as those thinkers were reimagining a new moral-political order, debating its guiding norms, and exploring possible sources within the context of an evolving understanding of Heaven and its relationship with the humans. Tao Jiang argues that the competing visions in that debate can be characterized as a contestation between partialist humaneness and impartialist justice as the guiding norm for the newly imagined moral-political order, with the Confucians, the Mohists, the Laoists, and the so-called fajia thinkers being the major participants, constituting the mainstream philosophical project during this period. Thinkers lined up differently along the justice-humaneness spectrum with earlier ones maintaining some continuity between the two normative values (or at least trying to accommodate both to some extent) while later ones leaning more toward their exclusivity in the political/public domain. Zhuangzi and the Zhuangists were the outliers of the mainstream moral-political debate who rejected the very parameter of humaneness versus justice in that discourse. They were a lone voice advocating personal freedom, but the Zhuangist expressions of freedom were self-restricted to the margins of the political world and the interiority of one’s heartmind. Such a take can shed new light on how the Zhuangist approach to personal freedom would profoundly impact the development of this idea in pre-modern Chinese political and intellectual history. 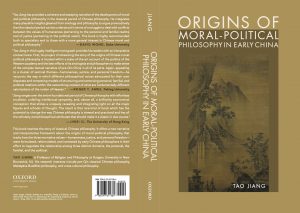 【Lingnan Prism Symposium Series (3.2): “A Crisis, or a New Direction?: Reconsidering the Translation of Chinese Philosophy”】(https://prism-journal.org/2021/05/01/lps-3-2/)
An online symposium is to be held on 9-10 May, 2021, on past and contemporary attempts to tackle Chinese philosophy through translation in the Western world, from the Jesuit missionaries to present-day translators working in academia and beyond. Speakers will address the cultural impact of translated Chinese philosophical masterworks in the West in different historical periods, examining seminal texts of the Confucian, Buddhist and Daoist traditions.

END_OF_DOCUMENT_TOKEN_TO_BE_REPLACED

It’s a bit last minute, but readers of this blog might be interested in the following talk tonight:

The Yogic Practice School (Yogācāra) is one of the two main traditions of Indian Buddhist philosophy. Its luminaries made significant contributions to epistemology and logic, and they developed a sophisticated vision of the path to awakening aimed at transforming pathological mental patterns and developing attitudes conducive to more skillful engagement with other beings and the world. One of the most important Yogācāra doctrines is the “three natures”: the imputational, the other dependent, and the ultimately real. The first refers to false notions imputed to the phenomena of experience; the second involves viewing phenomena as arising in dependence on causes and conditions, which is correct on the conventional level but mistaken from an ultimate perspective. The ultimately real nature is how sages view things: without the false overlay of the imputational and free from subject-object dichotomy. I will begin with an overview of the three natures and how they function within the Yogācāra soteriological system, and will then discuss how the third—the ultimately real—has largely been mistranslated and misconstrued by contemporary scholars who work on the tradition. This is more than just termininological quibbling because correct understanding of the ultimately real is crucial to the entire Yogācāra project, and it has ramifications for Buddhist practice more generally.

John Powers is a Fellow of the Australian Academy of Humanities and Professor of Religion at Deakin University in Australia. He is the author of 18 books and more than 100 articles and book chapters, mainly on Buddhist philosophy and history of ideas, as well as environmental history, human rights, and gender, and propaganda. His books include A Bull of A Man: Images of Masculinity, Sex, and the Body in Indian Buddhism (Harvard, 2009) and Dignāga’s Investigation of the Percept and Its Philosophical Legacy (with Douglas Duckworth, David Eckel, Jay Garfield, Sonam Thakchoe, and Yeshes Thabkhas. Oxford, 2017).

Here’s the link to register: http://bit.ly/3sCe2JH