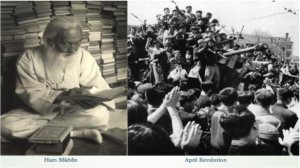 Many elements formed Korean modernity/coloniality from the 19th century onward: a receding Sinocentric world, an encroaching Western world, Japanese colonialism, the “New Woman,” racialization, Marxism, a cataclysmic war at home, a divided country, U.S. imperialism, struggles between authoritarian regimes and peoples’ movements, a diasporic nation… This workshop explores philosophical figures and themes in this nexus of forces and concepts. Talks and speakers include: