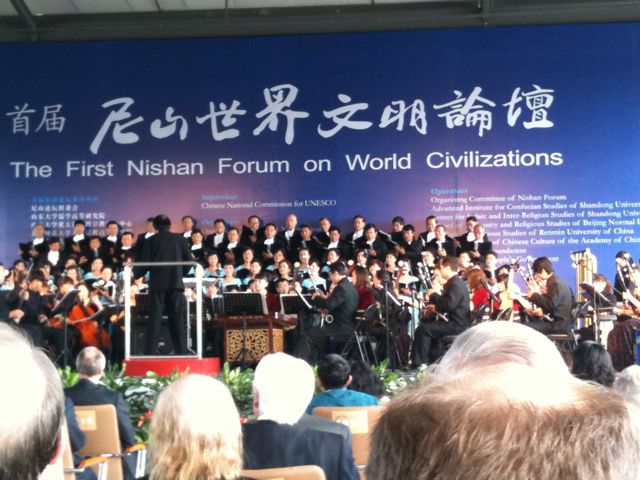 Nishan is the reputed birthplace of Confucius, near Qufu (in Shandong province) where the Kong family has lived for many generations. The Forum was an interesting event, heavily supported by various levels of government (notice the orchestra, playing pieces specially written for the event), and clearly designed to contribute to the increasing visibility of Confucianism, both domestically and internationally. There is a lot one could say about the event, both in terms of its content and in terms of the way it was framed (e.g., why was Robert Schuller chosen as the most prominent representative of Christianity at this “dialogue between Confucianism and Christianity”?). There is no simple conclusion, positive or negative, that one can draw from a complex event such as this, but I thought I would share some concerns that crystallized in my mind when thinking about a question that a journalist at the Forum asked me. He said, “Do you think Americans should be worried about the rise of Chinese culture?”

The philosopher’s answer to this (and almost any other) question is: it depends what you mean by some of your words. In particular, the “rise of Chinese culture” can mean different things. On the one hand, it could mean a greater awareness on the part of both Chinese and non-Chinese about the great traditions of Chinese philosophy, religion, literature, and art. I believe that many readers of this blog have learned from such a heightened awareness of Confucian insights, and I believe it would be a good thing if more people—Chinese and non-Chinese—were to take these sorts of insights seriously, as guidance for their lives and as a means to better understand the universe. This kind of “greater awareness” is perfectly consistent with simultaneously being moved by insights and values from other philosophical and spiritual traditions. In this sense, the rise of Chinese culture would lead to a greater sense of possibilities, as well as the challenges of finding new ways to integrate perspectives as we all seek to live fulfilling lives in our ever-changing world.

On the other hand, I believe that some people have a different vision of the “rise of Chinese culture.” Rather than thinking of Chinese culture as open, changing, and composed of parts (texts, insights) that can be constructively employed in many different places, some people think of Chinese culture as “a civilization,” as a monolithic whole, and as equivalent to the Chinese nation. According to this kind of opinion, the only way for China to occupy a more significant role in the world is for Chinese culture—by which they mean Confucianism—to be more influential. Chinese people must become thoroughly Confucian; perhaps foreigners will “convert” to Confucianism. Admittedly, this vision fits with the way that some Americans think about the world, as Samuel Huntington infamously articulated in his book the Clash of Civilizations. According to this way of thinking, cultures are single units that compete with one another, and one’s nation only succeeds in such a competition if one’s culture “rises.” If this is the right way to think about the “rise of Chinese culture,” then I suppose Americans should be worried about it!

No one at the Nishan Forum explicitly said that the “rise of Chinese culture” should be understood in the way described in my last paragraph. But to some degree, I think that many participants—both Confucian and Christian, both Chinese and non-Chinese—made some assumptions that suggest the closed, monolithic idea I was just describing. The language of multiple “world civilizations” easily leads one to think that each national culture is distinct, and that they do not and cannot overlap. Much of the talk at the Forum was about understanding the differences and similarities between Confucianism and Christianity, but this risks forgetting that each tradition grows and changes, and even at a single point in time has many different interpretations. It also makes it hard to see where there is room for Confucian ideas in America or Christian ideas in China, unless it is through competition and conversion. Furthermore, it makes it difficult to understand that there can be Confucian Christians and Christian Confucians (and many, many other possibilities).

The Nishan Forum was a splendid event, and I believe that Confucianism has a great deal to offer to, as well as learn from, our diverse world civilization. So do other Chinese traditions, even though I personally find the most insight in Confucianism. So the rise of Chinese culture is and should be a great thing for the world. We should all be happy that Chinese scholars and now many public officials are encouraging the study and practice of Confucian values and texts. We should also be happy that  Americans (and others!) have started to learn about, and learn from, Confucianism. So long as we all can embrace an open attitude toward our traditions and their roles in world civilization, the future looks bright.

10 replies on “Nishan Forum and Rise of Chinese Culture”