Oxford University Press has just published my new book on early Confucian social thought, and what contemporary people might learn from it: Mastery, Dependence, and the Ethics of Authority.  The publisher’s page is here.  At present the cheapest way to purchase it is directly from Oxford, with a discount code for 30% off (AAFLYG6). 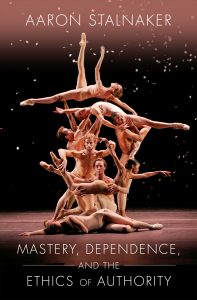 This comes with hearty thanks to Steve Angle and Bryan Van Norden, who were belatedly revealed as the press’s referees.

END_OF_DOCUMENT_TOKEN_TO_BE_REPLACED 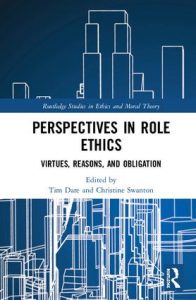 Routledge has published a collection of essays on role ethics edited by Tim Dare and Christine Swanton, which includes two essays on early Confucian ethics. More information is here.

The publisher’s description is as follows:

Although our moral lives would be unrecognisable without them, roles have received little attention from analytic moral philosophers. Roles are central to our lives and to our engagement with one another, and should be analysed in connection with our core notions of ethics such as virtue, reason, and obligation.

This volume aims to redress the neglect of role ethics by confronting the tensions between conceptions of impartial morality and role obligations in the history of analytic philosophy and the Confucian tradition. Different perspectives on the ethical significance of roles can be found by looking to debates within professional and applied ethics, by challenging existing accounts of how roles generate reasons, by questioning the hegemony of ethical reasons, and by exploring the relation between expertise and virtue. The essays tackle several core questions related to these debates:

What are roles and what is their normative import?
To what extent are roles and the ethics of roles central to ethics as opposed to virtue in general, and obligation in general?
Are role obligations characteristically incompatible with ordinary morality in professions such as business, law, and medicine?
How does practical reason function in relation to roles?
Perspectives in Role Ethics is an examination of a largely neglected topic in ethics. It will appeal to a broad range of scholars in normative ethics, virtue ethics, non-Western ethics, and applied ethics interested in the importance of roles in our moral life.

For those who are ethicists by profession–you at least teach or have taught it, I think, would allow you to clear the bar–Eric Schwitzgebel (author of The Splintered Mind) has a Moral Sense Test he’d like you to take. His subject recruitment post is here, a copy of which is pasted below. Also, if you know of any ethicists who aren’t hep to the bloggin, send them Eric’s link; he needs a lot of ethicists to take this test.

Fiery Cushman at Harvard and I are running a new version of the “Moral Sense Test”, which asks respondents to make moral judgments about hypothetical scenarios. We’re especially hoping to recruit people with philosophy degrees for this test so that we can compare philosophers’ and non-philosophers’ responses. So while I would encourage all readers of this blog to take the test (your answers, though completely anonymous, will be treasured!), I would especially appreciate it if people with graduate degrees in philosophy would take the time to complete it.

The test should take about 15-20 minutes, and people who have taken earlier versions of the Moral Sense Test have often reported it interesting to think about the kinds of moral dilemmas posed in the test.

Here’s the link to the test.

So, continuing some thoughts about language and theory in ethical thought, I’ve been thinking about what significant difference there is supposed to be between ethical guidance through principles as opposed to guidance through some form of “conceptual mastery” or even “skill mastery.”

One way to think of the difference, roughly, between Western and early Chinese ethical thought is to think of the former as emphasizing formulation of principles and guidance through them and the latter as emphasizing either mastery of some sort of “thick” ethical concepts or some set of “ethical skills.” Hence, dominant forms of ethical theorizing in the modern West seem concerned to formulate correct principles of right action so that people can adopt them for deciding how to act, in morally relevant contexts of choice. On the other hand, what seems of concern to early Confucianism seems to be to grasp the meaning and import of certain important terms such as ren 仁 (“humaneness”), li 禮 (“ritual piety”), and so forth; and/or to master certain sorts of “moral perception” skills that involve some kind of correct “connoisseur” responses and judgments–e.g. seeing something as ren or as failing to be li.

There are a few questions about the accuracy of these generalizations that call for some narrowing. Isn’t “Western” really just a gloss for a particular style of theoretical inquiry, largely in the modern era, that models itself on scientific inquiry or on legal reasoning? Shouldn’t something be said about the role of “manuals” of ritual and ceremony, e.g. the Zhouli (The Rituals of the Zhou) and the Liji (The Record of Ritual) for Confucian thinking about ritual piety? They seem to provide discursive action-guidance, and maybe even justification (as a set of rules) for particular ritual actions and attitudes, if not for the institution as a whole (which is something I take Xunzi to have been trying give). Also, the Mohists seem pretty clearly to be formulating an action-guiding principle–viz. to promote benefit.

Those who know the later Wittgenstein views could maybe see a connection here–I’m not at all an expert on Wittgenstein and it’s been years and years since I read anything on his views, so that would be helpful if someone could speak to the connection or its lack. Those familiar with W.D. Ross should see some connection here, I think, because Ross’s intuitionism requires some kind of noetic perception of one’s true duty from the interactions among considerations of prima facie duties that apply to a situation. That sounds like a skill to me, not unlike skill in legal reasoning (?)–someone who knows about this could also speak to it better than I.

This is all to suggest, tentatively, that there really isn’t much difference when we get down to the business of ethical living between having a “principle-based” view and some more “skill-based” view. Or is there? I’m inclined to reduce principle-application and concept-application to considerations of skill, albeit some kind of mental or “perceptual” skill, but maybe there are problems with that…

Here’s an issue that I think is relevant to any view about “flourishing” attributed to early Chinese philosophy. If the basic idea of flourishing is some idea about faring well, or “welfare,” we can ask what it takes conceptually to have such an idea. What comes to mind for me is that there has to be some notion of a person’s good, where that good is construed in some way independent of acting correctly–i.e. it has to be a notion of a person’s “non-moral” good. Even as I write that, I’m not quite sure what the reason for that is, but it seems important to me to keep welfare distinct from rightness. I might be totally wrong, but my philosophical instincts whisper otherwise.

The reason this seems important to me vis-a-vis early Chinese philosophy is that it seems like the non-moral good is featured in the Mohist idea of benefit, li 利. But li is not taken as theoretically central or even relevant in the Analects and the Mencius. Maybe it is important in the Xunzi, but I think that is because the Xunzi has a consequentialist view like the Mozi. If any of this is on the right track, then there is not in fact any virtue ethics in early China, in the sense that Van Norden and others think there to be. A lot rides on the idea of flourishing as relying on that of the non-moral good, and hence as being construed independently of rightness, so I wonder what can be said in favor of or against that…