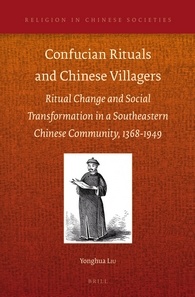 In Confucian Rituals and Chinese Villagers, Yonghua Liu presents a detailed study of how a southeastern Chinese community experienced and responded to the process whereby Confucian rituals – previously thought unfit for practice by commoners – were adopted in the Chinese countryside and became an integral part of village culture, from the mid fourteenth to mid twentieth centuries.

The book examines the important but understudied ritual specialists, masters of rites (lisheng), and their ritual handbooks while showing their crucial role in the ritual life of Chinese villagers. This discussion of lisheng and their rituals deepens our understanding of the ritual aspect of popular Confucianism and sheds new light on social and cultural transformations in late imperial China.

Yonghua Liu, Ph.D. (McGill, 2004), is Professor of History at Xiamen University, China. He has published over two dozen articles on economic, social, and cultural history of late imperial China.

A Reflection on Religion and Global Justice

Buttressed by an autocratic system, China’s colossal economic growth over the past decades seems to have had the paradoxical effect of undermining the foundation of Western domination but at the same time invigorating Eurocentricism. In particular, it highlights the current relevance of the central conviction of Weber’s Orient: the absence of civic roots in non-Western societies will create a kind of “uncivic” capitalist system in which one has no choice but to seek to compensate for instabilities through authoritarian institutions. Does this mean that the West may alone afford to harmonize political stability with the universalistic ideal of justice as the basic structure of society? If not, how then is it possible to develop a notion of the primacy of social justice that transcends the limits of liberal democracy? This book aims at addressing these timely questions by drawing on “Confucian Marxism”—a distinctive perspective on civil society.

Weigang Chen, Ph. D. (Religious Studies, Harvard University 2000), is on the faculty of philosophy and religious studies at University of Macau, with research interests in religion and global politics. He is a member of the editorial board of Dao: A Journal of Comparative Philosophy.