The National Taiwan University’s philosophy journal, NTU Philosophical Review is inviting submissions (in English) to their special issue on the theme “Self and Other”. These submissions must relate to the theme in any philosophical tradition. Submission Deadline: July 15, 2022. All submissions  should be emailed as attachment to Dr. Ann A Pang-White and Dr. Ming-Chao Lin. Read below for more information on submissions.

END_OF_DOCUMENT_TOKEN_TO_BE_REPLACED

The Northeast Workshop to Learn About Multicultural Philosophy (NEWLAMP) is holding a summer institute to equip philosophy teachers with competency to ingrate traditionally underrepresented areas of philosophy into their courses. This project works toward remedying the issue of solely discussing “Western”, Anglo-European philosophy and attempting to teach areas such as African or Islamic philosophy. In the past year NEWLAMP focused on African and Africana social and political philosophy. By doing this NEWLAMP thinks that it will raise interesest in the philosophy major and ultimately transform it. Click HERE to read more about this workshop and its ideas.

The 22nd International Conference on Chinese Philosophy received a total of 57 papers for the Fu Foundation Asian Philosophy Essay Contest and three papers were chosen from them as award recipients. The Fu Foundation award a prize of $2000 to each winner, but there will no longer need travel fees as they will be presented at the ISCP’s online conference on June 27- June 1st  Read below to learn more about the winners and their papers.

END_OF_DOCUMENT_TOKEN_TO_BE_REPLACED

I just learned that our friend and colleague, Professor Zhang Xianglong, passed away in Beijing last night. Here’s the announcement in Chinese:

Xianglong was a prominent scholar of phenomenology and Chinese philosophy at Peking University. This is a major loss for Chinese and comparative philosophy. Those of us who had the good fortune of knowing him and working with him over the years were invariably impressed by his philosophical acumen and generous spirit. RIP, Xianglong.

Dao: A Journal of Comparative Philosophy 21:2 has recently been published. There are 14 articles in this issue that was published in June 2022. Read below for a table of contents.

END_OF_DOCUMENT_TOKEN_TO_BE_REPLACED

The Association of Chinese Philosophers in North America is inviting authors to submit individual papers to be included in a single ACPA group session at the 2023 APA Eastern Division Meeting. The APCA is open to any submissions that engage with Chinese philosophy in a wide variety of ways and they are not specifying a theme. The selection of papers will be based on how well they can be worked into a good session. For more information about submissions click here. Submission Deadline: June 13, 2022. To submit abstracts click here. Read below for guidelines for submissions.

END_OF_DOCUMENT_TOKEN_TO_BE_REPLACED

Aeon just published my article on the Zhuangzi, “Beyond dust and grime.” Here is the link:

It is a rewrite of the Zhuangzi chapter in my Origins of Moral-Political Philosophy in Early China (OUP 2021). 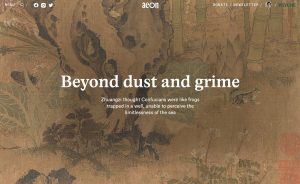 Dao has established “The Annual Best Essay Award” since 2007. The editorial board has just finished its deliberation on the best essay published in 2021, and the award is given to:

Benoit Vermander, “Edit by Number: Looking at the Composition of the Huainanzi, and Beyond.” Dao: A Journal of Comparative Philosophy 20 (2021): 459-498

Via a hermeneutics focused on numerology and concentric arrangements, the essay, which demonstrates familiarity with the germane historiography, literature, and theoretical apparatuses, offers an original construal of a textual universe in early China writings. Instead of taking for granted the organization and configuration, or the absence thereof, of these texts, it argues that there is a structural rhetoric. With particular reference to the Huainanzi, it lays bare the discernible and distinguishable patterns of textual composition while relating them to corresponding patterns of thinking. In so doing, it suggests the possibility and importance of looking beyond the writings’ intertextuality and toward their inter-structure.

The two runners-up are:

Springer has set the above three essays for free access.

END_OF_DOCUMENT_TOKEN_TO_BE_REPLACED

The International Society for Chinese Philosophy is inviting authors to submit papers on any area of Chinese or Comparative philosophy. All accepted submissions will be presented at a Groups Session of the APA Eastern Division Meeting in Montreal, Quebec, on January 4-7 2023. Please send the submission electronically to Dr. Jeo Sophia Oh with  “ISCP APA Eastern” in the subject line. Submission Deadline: June 12, 2022. The submission should include the following

Sha Li’s article “Yan Fu, John Seeley, and the Idea of Liberty” has recently been published in Modern China. “This article advances a more precise appreciation of Yan Fu’s idea of liberty based on a close and contextualized reading of his Lectures on Politics.” This interpretation “exposes [Yan’s] own persistent views and tendencies. Specifically, Yan’s text adopts Seeley’s literal, neutral concept of liberty while extending its use as security against political tyranny.”