Eric L. Hutton and I are very pleased to announce the launch of a new book series devoted exclusively to translations of Chinese philosophical and religious texts, Oxford Chinese Thought. The series will be published by Oxford University Press and, at least initially, all books will be released immediately into paperback. As most readers of this blog know, there is a vast body of philosophical and religious literature in Chinese and only the thinnest slice of it — barely a sliver — has been translated into English, which has created major obstacles to teaching and scholarship on Chinese thought, especially to teaching the post-classical thinkers in depth. Oxford Chinese Thought aims to address this longstanding challenge by providing high-quality English translations that are well suited for classroom use.

Translations are solicited by the series editors in consultation with the advisory board. We intend to focus primarily on post-Han texts that played significant roles in shaping Chinese thought. 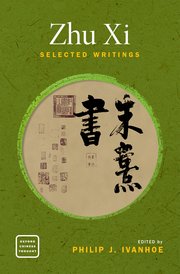 The first book in the series will be Zhu Xi: Selected Writings, edited by Philip J. Ivanhoe and to be published by July of 2019. This is the first comprehensive reader of Zhu Xi, with selections of Zhu’s writings or lessons on a wide variety of topics, including his ethics, metaphysics, political thought, views on ghosts and spirits, objections to Daoism and Buddhism, selected commentaries, and his thoughts on literature, poetry, and current social conditions. We hope the book will be of use to scholars and teachers of philosophy, religion, history and literature.

The second book will be a translation of the Treatise on Awakening Mahāyāna Faith, by John Jorgensen, Dan Lusthaus, John Makeham, and Mark Strange, to be published by October of 2019. This treatise is quite plausibly the most influential systematic text in Chinese Buddhism, marking a departure from Indian Buddhism and raising the issues in Buddhist metaphysics and Buddhist practice that became central for practitioners of Chan, Huayan, Tiantai, and to some extent Pure Land Buddhism.