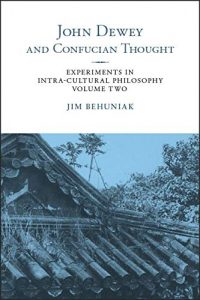 In this timely and original work, Dewey’s late-period “cultural turn” is recovered and “intra-cultural philosophy” proposed as its next logical step—a step beyond what is commonly known as comparative philosophy. The first of two volumes, John Dewey and Daoist Thought argues that early Chinese thought is poised to join forces with Dewey in meeting our most urgent cultural needs: namely, helping us to correct our outdated Greek-medieval assumptions, especially where these result in pre-Darwinian inferences about the world.

Relying on the latest research in both Chinese and American philosophies, Jim Behuniak establishes “specific philosophical relationships” between Dewey’s ideas and early Daoist thought, suggesting how, together, they can assist us in getting our thinking “back in gear” with the world as it is currently known through the biological, physical, and cognitive sciences. Topics covered include the organization of organic form, teleology, cosmology, knowledge, the body, and technology—thus engaging Dewey with themes generally associated with Daoist thought. Volume one works to establish “Chinese natural philosophy” as an empirical framework in which to consider cultural-level phenomena in volume two.

In this conclusion to his two-volume series, Jim Behuniak builds upon the groundbreaking work begun in John Dewey and Daoist Thought in arguing that “Chinese natural philosophy” is the proper hermeneutical context in which to understand early Confucianism. First, he traces Dewey’s late-period “cultural turn” in more detail and then proceeds to assess Dewey’s visit to China in 1919–21 as a multifaceted “intra-cultural” episode: one that includes not only what Dewey taught his Chinese audiences, but also what he learned in China and what we stand to learn from this encounter today.

“Dewey in China” provides an opportunity to continue establishing “specific philosophical relationships” between Dewey and Confucian thought for the purpose of getting ourselves “back in gear” with contemporary thinking in the social and natural sciences. To this end, Behuniak critically assesses readings of early Chinese thought reliant on outdated Greek-medieval assumptions, paying particular attention to readings of early Confucianism that rely heavily on Western virtue ethics, such as the “Heaven’s plan” reading. Topics covered include education, tradition, ethics, the family, human nature, and religiousness—thus engaging Dewey with themes generally associated with Confucian thought.