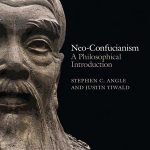 Justin Tiwald and I are very happy to announce the publication of our jointly-authored book, Neo-Confucianism: A Philosophical Introduction (Polity, 2017). Advance copies of the book have begun to appear, it will be generally available in the UK soon, and available in the US in another six weeks or so.

Justin and I have also prepared a website, Neo-Confucianism.Com, to support the book and to promote the study of Neo-Confucianism more generally. That site has its own blog (plus lots of other stuff, including sample syllabi and the Chinese texts corresponding to all the translated material in the book), though I expect that when we post things there, we will also announce it here. If anyone has ideas about what other material we can include at Neo-Confucianism.Com, please just let one of us know!