Today’s Financial Times has an op-ed by Daniel Bell on the Harmony Index (an index that ranks countries according to level of social harmony that he developed with Yingchuan Mo at Tsinghua’s Center for International and Comparative Political Theory):
http://www.ft.com/cms/s/0/0aa0a360-5049-11e3-9f0d-00144feabdc0.html
Here’s a link to the index itself:
www.harmonyindex.org

“UH Mānoa Philosophy Professor Roger T. Ames has been presented with a 2013 Confucius Culture Prize at the Sixth Annual World Confucian Conference in Shandong, China.  The prizes are sponsored by the People’s Republic of China (PRC) Ministry of Culture and the provincial government of Shandong Province—the home province of the sage Confucius.”

The full press release can be found here: http://manoa.hawaii.edu/news/article.php?aId=6047 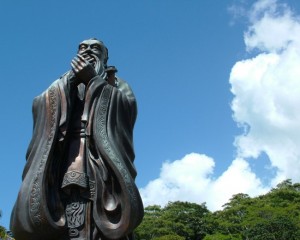 “Picture a world where human relationships are challenging, narcissism and self-centeredness are on the rise, and there is disagreement on the best way for people to live harmoniously together.

It sounds like 21st-century America. But the society that Michael Puett, a tall, 48-year-old bespectacled professor of Chinese history at Harvard University, is describing to more than 700 rapt undergraduates is China, 2,500 years ago.

Puett’s course Classical Chinese Ethical and Political Theory has become the third most popular course at the university….”

The government enacted a law on Monday aimed at compelling adult children to visit their aging parents. The law, called “Protection of the Rights and Interests of Elderly People,” has nine clauses that lay out the duties of children and their obligation to tend to the “spiritual needs of the elderly.”

Children should go home “often” to visit their parents, the law said, and occasionally send them greetings. Companies and work units should give employees enough time off so they can make parental visits.

The law was passed in December by the standing committee of the National People’s Congress. It does not stipulate any punishments for people who neglect their parents. Nevertheless, that officials felt the need to make filial duty a legal matter is a reflection of the monumental changes taking place throughout Chinese society.

Manyul and I both received our PhDs from the University of Michigan, so I must call attention to Sam Crane’s blog post concerning UM basketball player Jon Horford’s fascination with the Dao De Jing. Michigan plays for the National Championship on Monday night; as Sam says, Do Nothing Blue — and there is nothing that will be undone!

This was kind of a fun read. (Read the rest at the New York Times website, here.) Any thoughts?

Jin Li grew up in China during the Cultural Revolution. When the madness was over, the Chinese awoke to discover that far from overleaping the West, they were “economically destitute and culturally barren.” This inspired an arduous catch-up campaign. Students were recruited to learn what the West had to offer.

Li was one of the students. In university, she abandoned Confucian values, which were then blamed for Chinese backwardness, and embraced German culture. In her book, “Cultural Foundations of Learning: East and West,” she writes that Chinese students at that time were aflame — excited by the sudden openness and the desire to catch up.

Li wound up marrying an American, moved to the States and became a teacher. She was stunned. American high school students had great facilities but didn’t seem much interested in learning. They giggled in class and goofed around. END_OF_DOCUMENT_TOKEN_TO_BE_REPLACED

…goes to Vladimir Putin (!). Thank you, Yvgeny, for alerting us to this on the Question Board. Here is a permalink to the New York Times article about it, and below is a lead from that article:

It praised his decision to go to war in Chechnya in 1999.

“His iron hand and toughness revealed in this war impressed the Russians a lot, and he was regarded to be capable of bringing safety and stability to Russia,” read an English version of the committee’s statement. “He became the antiterrorist No. 1 and the national hero.”

Not only that, it applauded him for “acting as the propagandist of current political events” while still in high school, and for being selected to join the K.G.B. while in college, “which made true his teenage dream of joining the K.G.B.” Much later, of course, came the “large-scale military action towards the illegal armed forces in Grozny, Chechnya.”

This may be disturbing to some, at different levels. Relevant to the blog’s concerns, Vygeny wonders if this is further reason to think that “Confucianism is whatever people in official positions want it to become, that it is a foldable doctrine.” END_OF_DOCUMENT_TOKEN_TO_BE_REPLACED

Here’s a couple of links to news stories (one English, one Chinese) on the establishment of the 大成至聖先師孔子協會, or “Association of the Most Sage and Venerated Late Teacher Confucius,” announced yesterday in Taiwan. There aren’t many specifics yet about what they plan to do and I haven’t found a website for the association itself yet, but I’ll post more information if I come across any.

While there is a lull here, check out Sam Crane’s post on The Useless Tree about a plan in Taiwan to use the Four Books to help address problems in its high schools.